SUPERBELT IN WHITE FOR SINGER FEATHERWEIGHT 221 or 222 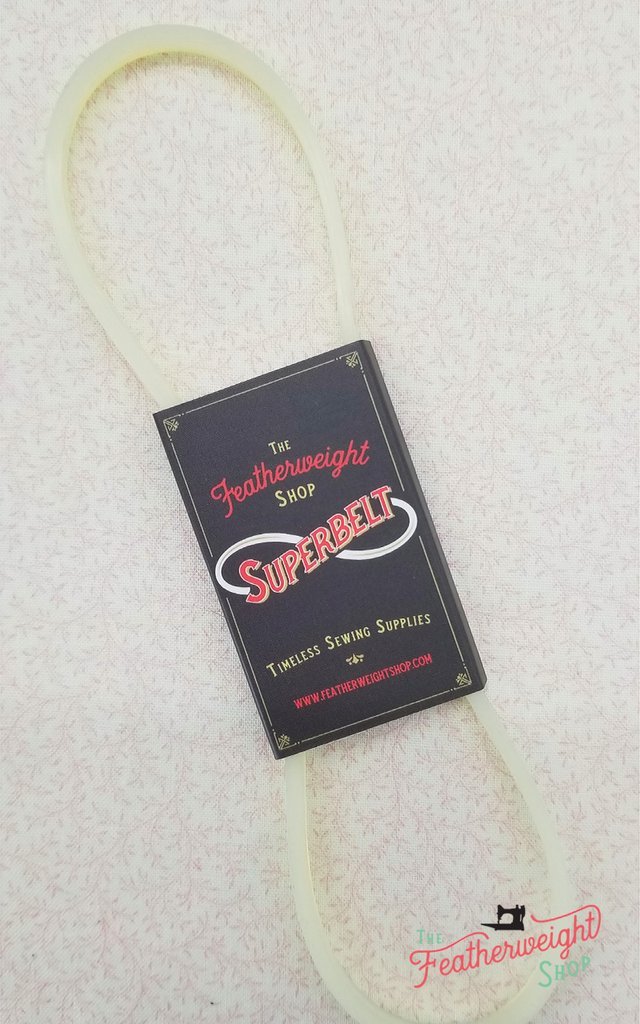 We are very excited to introduce the all NEW Superbelt! This product has been in development for the last couple of years, and we are thrilled that there is finally a quality replacement belt for the Singer Featherweight. These new belts are much softer, allowing the motor to run much faster with less resistance. Because these belts allow the machines to work more efficiently, the motors are under less strain with normal sewing. This will extend the life of your 221 & 222 Featherweight motor.

The Superbelt is available in Black or this Translucent White.

The video, under the video tab, will give step-by-step instructions for how to change and install  the new Superbelt as well as explain the advantages of a soft, pliable belt.

How to Replace and Install the Featherweight Belt

To replace and install the belt you will need to raise the motor up. To raise it, there is a screw on the back of the motor housing (seen from the front of the machine at the right side, behind the hull). Standing over the machine, with an appropriately-sized screwdriver in your right hand and your left hand holding the motor (you're leaning over the machine); you'll unscrew the screw just slightly and adjust your motor up a little bit so that it can loosen your current belt all the way. Remove the belt from around the motor pulley and handwheel and replace it with the new belt in the same manner, making sure that it is tucked into the correct position into the handwheel.

If you want to protect the finish on your machine; place a soft cloth between the screwdriver and the machine's hull or you can scratch the finish by trying to access that oddly-placed screw on the motor housing bracket.

Update!  One of the advantages to the Superbelt is its superb grip to the handwheel.  In the two years of testing, though, we have discovered that there are a few handwheels that may have a slight variation in their original manufacturing, and because the belt grips so well, it is possible that this will cause the belt to climb slightly to one side.  No worries at all if this happens, (it just means your belt is gripping extremely well, which is a good thing!), but with a very simple remedy, your belt will be situated as it should be right away.

Superbelts are treated with what's called belt dressing in the manufacturing process.  Likewise, at the autoparts store, some automotive belts have a dusting of belt dressing, too.  Automotive belts are made and dressed differently, of course, being used inside a vehicle engine, but the concept is similar.  Belt dressing actually helps with the gripping process!  So, on the rare occasion that the Superbelt grips extra firmly to the side of the Featherweight handwheel, rubbing a very, very miniscule amount of cornstarch around the belt surface will actually prevent this from happening.  Cornstarch will not hurt your machine, and it truly is such a tiny amount that when it is rubbed around the belt surface, it disperses evenly, allowing the belt to retain its cosmetic appearance.  One gal in the shop treated her Superbelt ever-so-slightly with a bit of cornstarch and her Superbelt has remained perfectly seated ever since!